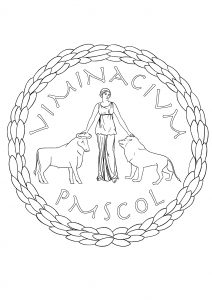 The reputation of the cultural richness of Viminacium has drawn the attention of not only the domestic but also the international public, who eagerly anticipate that Viminacium will take its rightful place in the first rank of the world’s cultural monuments. It is our expressed intention to uncover this city which has been buried for centuries, to explore it in detail and to interpret the remains for the general public. We sincerely hope that in the years to come Viminacium will become a distinguished symbol of Kostolac and its region and a significant part of the world’s cultural heritage.

The ancient city of Viminacium is unique in many aspects. It is exceptional with respect to the number of excavated graves (over 13,500 graves have been identified) as well as the quantity of artifacts found in them (over 32,000 objects); it is exceptional in terms of the surface area unencumbered for archaeological investigation (over 1,100 acres/450 hectares for the greater metropolitan area and 540 acres/220 hectares in the city territory proper). The remains of Viminacium extend entirely over cultivated fields, and both fragmentary and sometimes whole ancient artifacts lie scattered on the ground surface. All of these factors had to be taken into consideration in defining the objectives of the Viminacium Project, and, consequently, in devising the methods of exploration in the ancient city and military camp at Viminacium. That is why established scientists in various fields – mathematicians, electrical engineers, geophysicists, geologists, petrologists, and experts in artifical intelligence, remote sensing, three-dimensional modeling and formal analysis – were assembled for this project. A step forward had to be taken to move on from just exploring cemeteries, the cities of the dead, undertaken during the last quarter of the twentieth century, to investigating the city and the military camp proper.

The information gathered to date leads us to conclude that the present-day territories of the villages of Stari Kostolac and Drmno, which are located about 2 miles/3 kilometers from Kostolac and 60 miles/100 kilometers southeast of Belgrade, lie within the limits of the urban territory of the ancient city of Viminacium, the capital of the Roman province of Moesia Superior, which was called Moesia Prima in the late Empire.